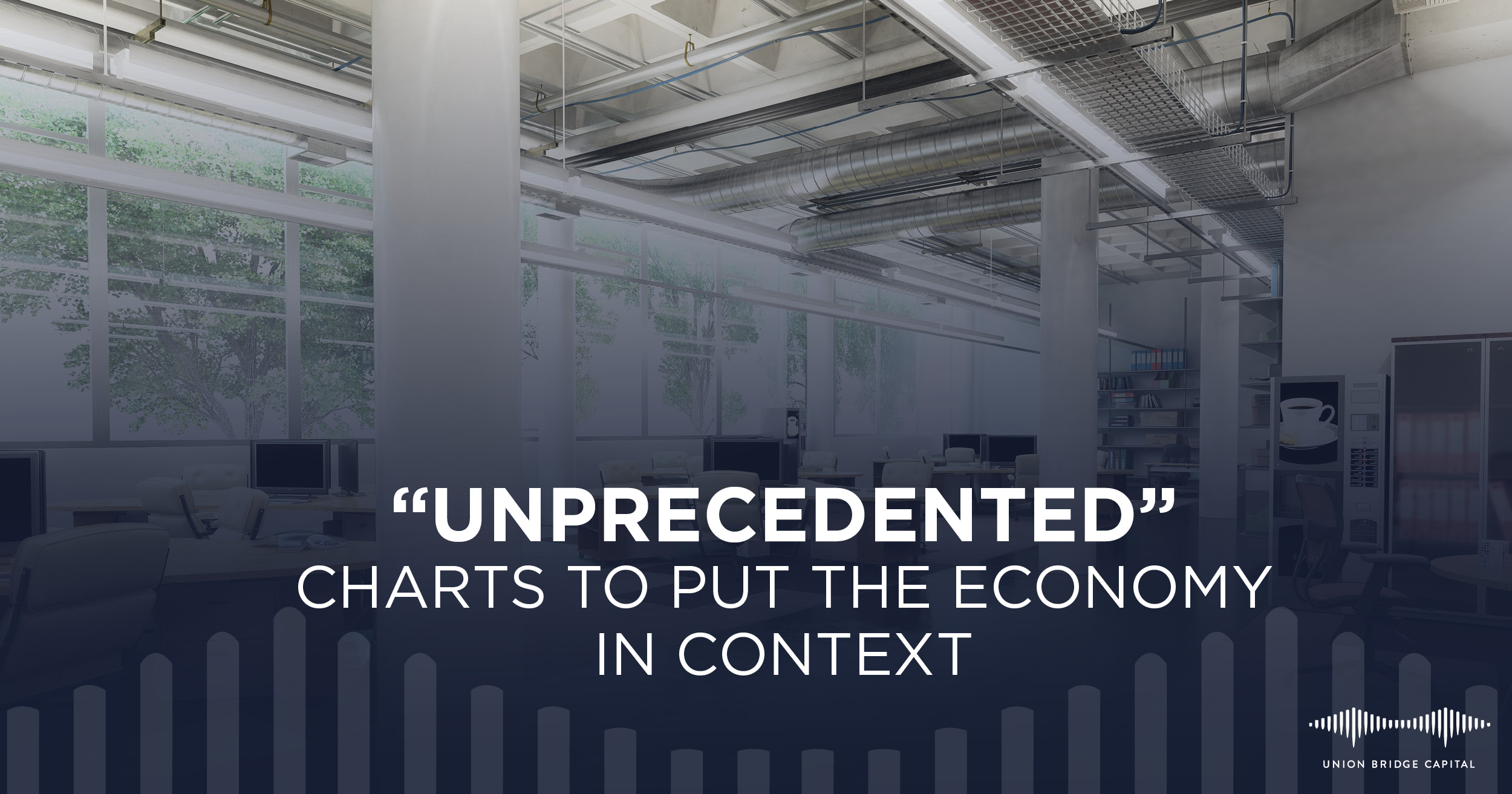 The last three months have been so “unprecedented” that Google Trends indicates that searches for the term “unprecedented” are up 1000% versus the historical average.  That’s, well, unprecedented.  During these unusual times, I have found charts and infographics helpful to put things into perspective.  Below, you can find a couple of our in-house charts along with our thoughts.

Thanks to Lower Rates, Housing is Becoming More Affordable

The Federal Reserve quickly cut rates during March, and mortgage rates followed in suit.  The average 30-year mortgage rate in the United States recently reached 3.15% according to the Federal Reserve, an “unprecedented” all-time low.   These low rates are having the impact of making purchasing a home more affordable for those who have been less affected by the pandemic.

To put this in perspective, the chart below shows the average principal and loan payment on a $500,000, 30-year fixed mortgage at various interest rates.  Please note, these calculations do not include property taxes or mortgage insurance. 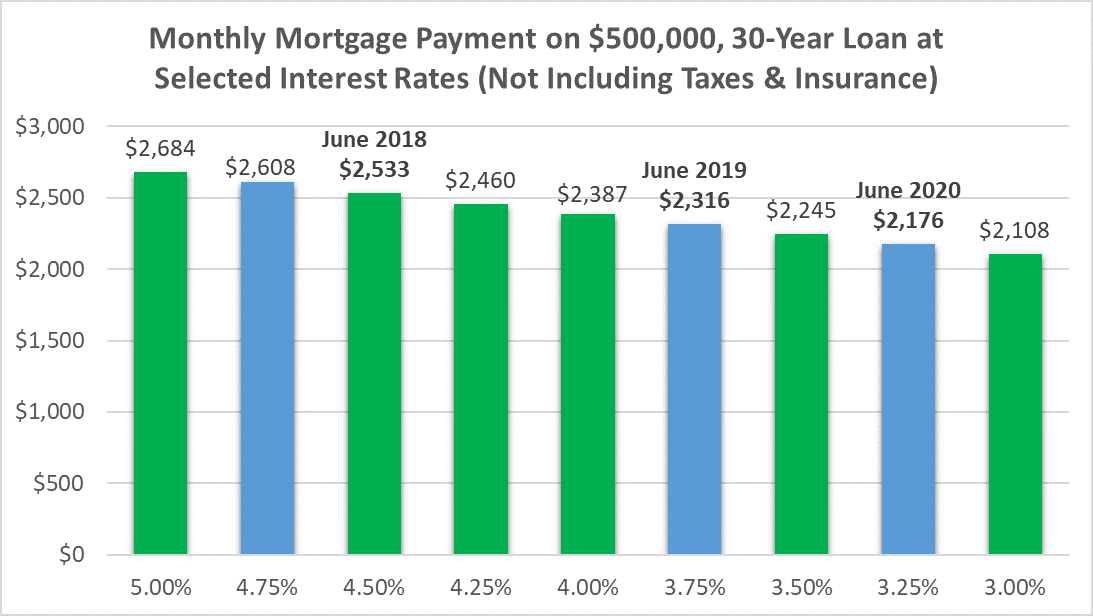 The Fiscal Stimulus Has Been Massive

As federal and state governments began to shut down the economy to “flatten the curve,” there was an implied promise that the government would help carry its populace through this difficult time.  That’s a big commitment, given that the annual gross domestic product of the United States exceeds 20 trillion dollars.

Please note, the Hero’s Act has a low probability of passing through the Senate.  While it may not be the size of the Hero’s Act, we do expect a new stimulus package to be created and passed toward the end of June. 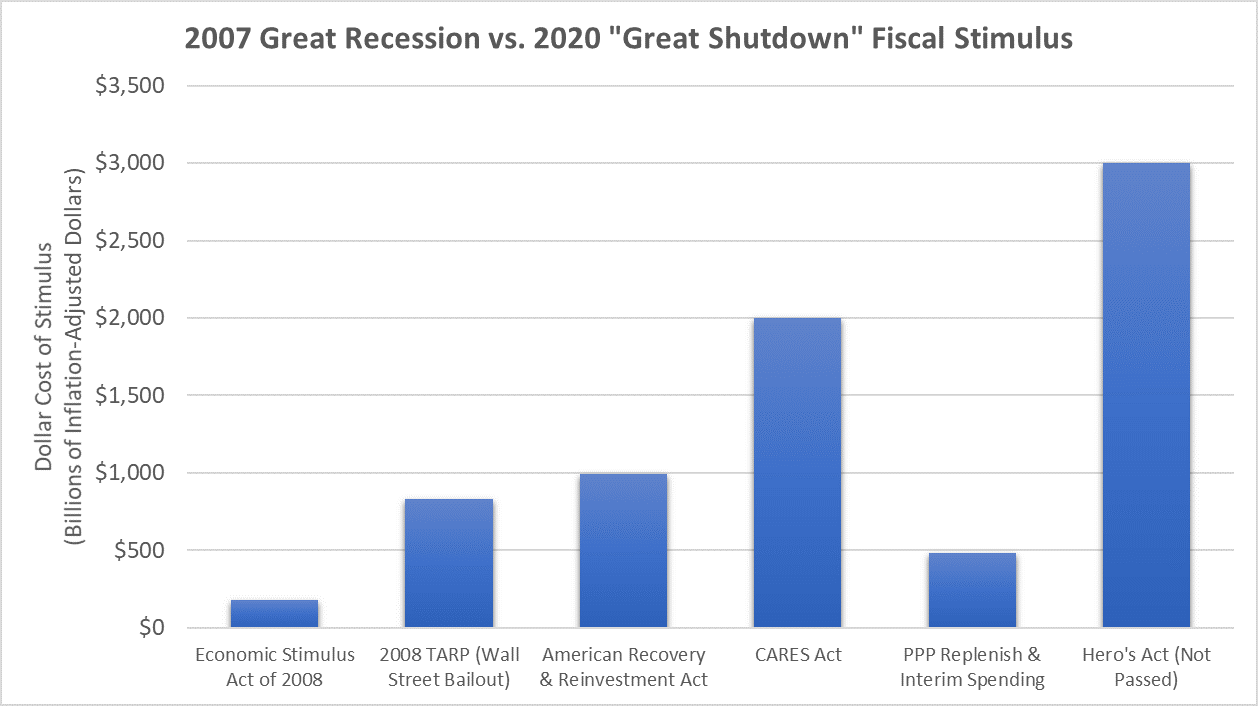 Another way of looking at how massive the economic stimulus has been is to look at the 2 trillion dollars allocated by the CARES Act versus other major government expenses.  I also included the market capitalizations of Apple and ExxonMobil as two more points for comparison. 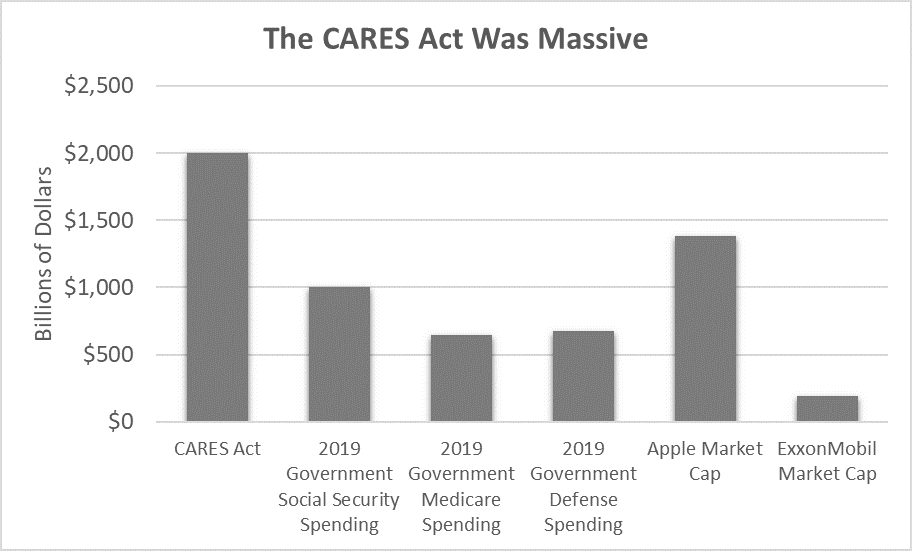 With a disparity in unemployment rates and varying degrees of lockdown between different states, a risk to some states in the coming months may be capital flight.  For instance, businesses with shut down or partially shut down facilities Northeast and West may decide to expand capacity across the Sun Belt states, which are reopening at a faster pace.  Time will only tell, and the Sun Belt likely faces larger risks arising from a “second wave” of coronavirus, but there is already chatter about a potential “exodus” from major northern metropolitan areas such as New York City and Chicago.

Long-Term Unemployment Could Slow the Recovery

In recent speeches, Federal Reserve Chair Jerome Powell has highlighted the risk of the economic shutdown causing a spike in “long-term unemployed” individuals.  He indicates that people who are unemployed for a long period of time often lose some of their networks and skill sets (or they become obsolete) and are generally looked at negatively by potential employers.  To this effect, a comprehensive paper written in 2015 suggested that, six years after the Great Recession ended, there were still 12 million individuals who employers did not want to hire because they were “long-term unemployed.”  Beyond the individual hardship placed on those unemployed and the loss in societal productivity caused by widespread joblessness, another reason to try and stave off long-term unemployment is to prevent federal, state, and local authorities from losing any more tax revenues.

Something Not Unprecedented. The Market Disconnecting From The Present

One of my colleagues said to me last week, “how can the stock market be only 5% below its all-time high when the world is certainly more than 5% messed up?”  It’s because the market is forward-looking.  In March, the declines in the market indicated an expectation of extended economic shutdowns and millions of deaths.  The recovery in stocks since has highlighted the market’s expectation of a slow but steady reopening of the economy over the summer and early fall, and a few potentially game-changing medications or treatment options for COVID-19 becoming available.

This isn’t the first time this has happened the stock market disconnected from the present.  In March 2009, the stock market bottomed and rallied amidst rising unemployment, foreclosures, and evictions.  If you looked for a news event near the day of the bottom, the most you would be able to find would be an announcement of a few new ways for businesses to record bad mortgages on their balance sheets.  In other words, no big news for a major market rally.  Stocks were climbing because investors were expecting an economic recovery over the months and years ahead.  That’s where we believe we are today, and are positioned to take advantage of any further major market advances to come.

SPEAK WITH ONE OF OUR ADVISORS ABOUT AN INTEGRATED WEALTH MANAGEMENT STRATEGY.

About Union Bridge Capital and Cantilever Wealth Management
Union Bridge Capital offers a comprehensive approach to investment advisory, tax services, risk management, and legal services to allow their clients to access these core drivers of wealth creation and maintenance from one unique point of delivery. The firm caters to individuals and businesses with complex financial needs and undertakes a holistic approach to managing financial matters with their unique Total Wealth Equation™. Cantilever Wealth Management offers professional investment management services for pensions, foundations, and endowments with a minimum starting portfolio value of $1 million.

Speak with one of our advisors today.