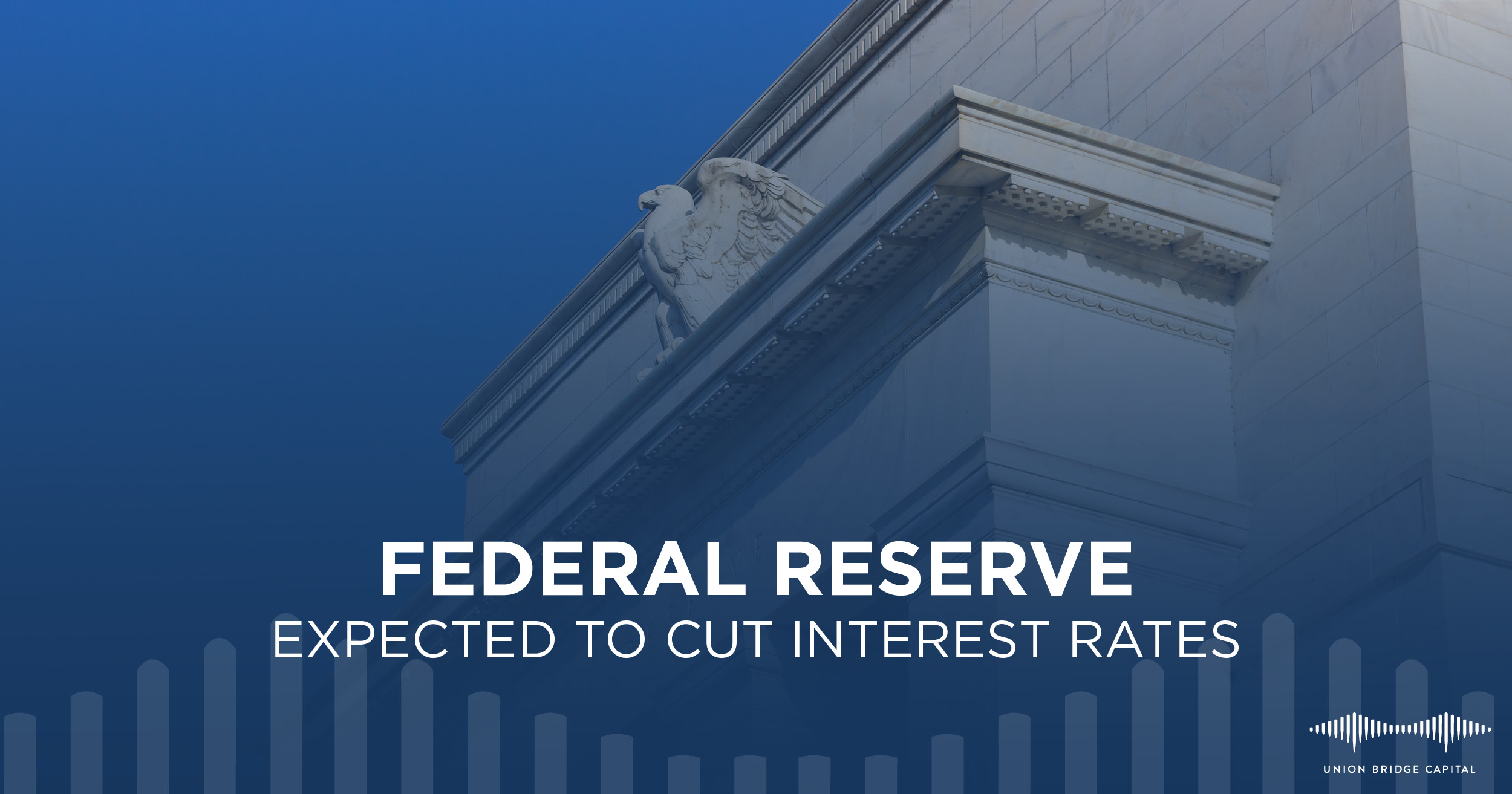 On July 31st, the Federal Reserve (Fed) is expected to announce a wind down and reversal of the tightening cycle which took place over the last five years.  For those that remember, the quantitative easing program, which was considered one of the most aggressive monetary stimulus initiatives in US history, ended in October 2014.

Various Fed governors have expressed the need for lower interest rates over the near term for two reasons. First, inflation has consistently undershot the Fed’s inflation target of 2%. A 2% inflation rate is considered the “Goldilocks” rate for inflation, as it is high enough to encourage production of goods, yet low enough to not eat away at the purchasing power of consumers. The second expressed reason for lower rates is to help offset any economic sluggishness caused by recent disappointing economic growth statistics from trade partners, shrinking business confidence, and a slowing housing market.

Cutting Early Is Better Than Late

Even with the expressed concerns from the Fed, our opinion is that the US economy is strong. Real GDP growth is expected to be above 3% for the first year since 2005, the labor market is robust, and the manufacturing industry is improving, albeit slower than last year. Our research indicates that the Fed is attempting to cut rates in advance of any major economic deterioration versus waiting until the economy has significantly weakened. Historically, this type of policy has kept the most severe recessions at bay. See below for a history of the timing of past cutting cycles and how it affected industrial production and the economy.

The Fed was historically late to cut rates when it was also was also fighting inflation. Before the 2007-2009 recession, the housing bubble was inflating. In 1973-1975, inflation was caused by high oil prices. High inflation causes an issue for the Fed because their mandates are to keep the economy strong while maintaining price stability – it’s difficult in practice to simultaneously address both mandates. When inflation is low, such as before the 2000 recession, the Federal Reserve is much less restricted in lowering rates. Low inflation currently is giving the Fed room to cut rates without much concern about price stability. This makes early cutting a feasible strategy to make the next economic contraction less severe.

The Market Isn’t Concerned About Inflation

One of the biggest concerns about loose monetary policy is that it often leads to currency devaluation. Since interest rates would be lower, fewer investors would want to own dollars versus a currency with a higher rate. In theory, this could cause inflation, but we believe the demand for dollars will remain strong, even with lower rates. This is because the dollar’s status as the global reserve currency and also as a safe haven asset.

As for inflation, see the two price charts below for gold and bitcoin. Both assets are often regarded as hedges against inflation. 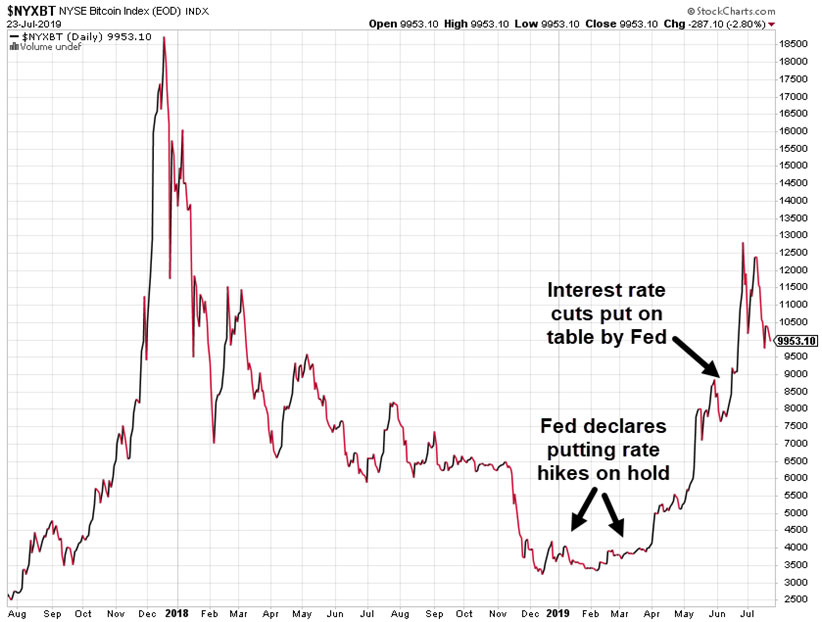 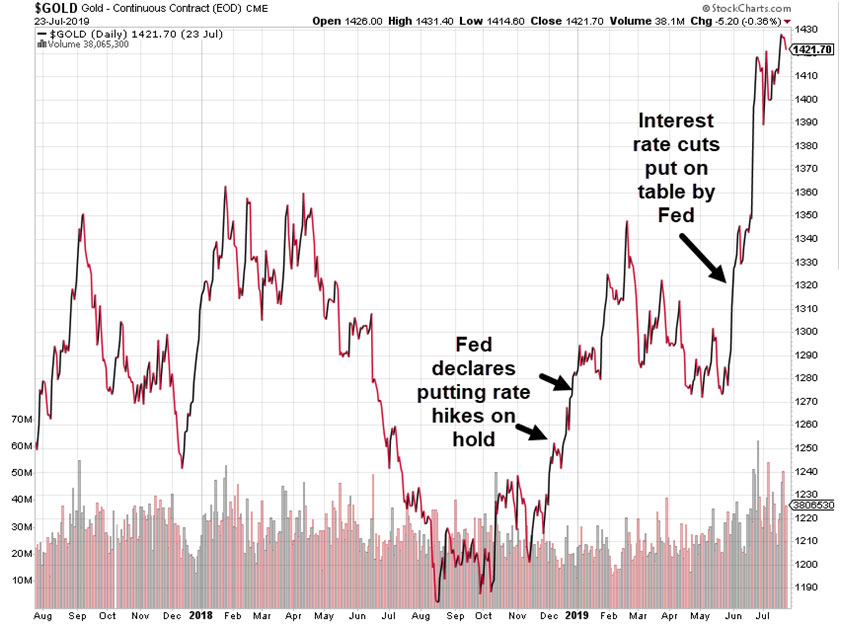 These two charts have been showcased as “smoking guns” on CNBC as evidence that investors are expecting higher inflation, but they forgot to include one critical piece of data – the implied inflation rate derived from the spread between inflation-protected Treasuries and plain-vanilla Treasuries. See below for the expected annual inflation rate derived from this market. It is about 1.60%, near its lowest level over the past two years.

It is evident that bond market participants are not concerned about inflation. Instead the potential for a global economic contraction is attracting investors to gold and bitcoin because they are considered hedges against global systemic risk. As we have mentioned before, the yield curve inverted in March of this year, indicating that a major stock market top should appear by 2021. It seems some investors are placing bets ahead of any economic malaise which could develop. As for us, we believe that, tipping our hats to baseball season, just because it’s the eighth or ninth inning doesn’t mean there isn’t still time to score some runs.

As for next week’s expected rate cut, we believe a 0.25% cut is largely discounted by investors. We also believe investors are then expecting another 0.50% in cuts by yearend. We will be monitoring the guidance offered from the Jerome Powell, the Chairperson of the Federal Reserve, next Wednesday. Mention of tighter monetary conditions through the coming months would be considered a surprise and could undermine economic confidence, which could eventually cause our forecasting systems to turn negative. Stay tuned.